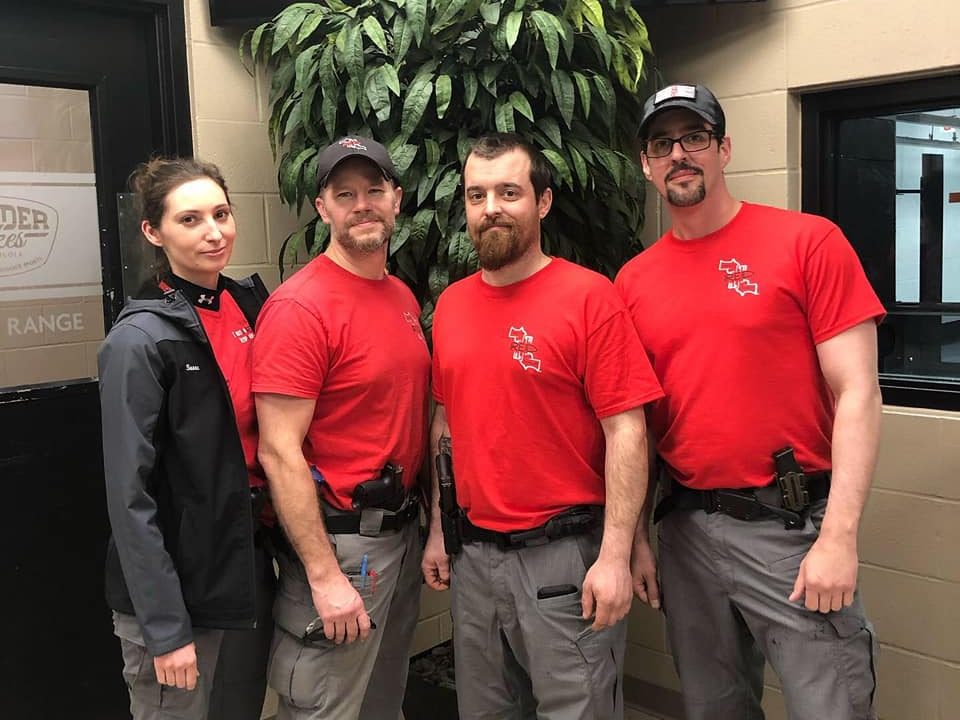 Kjell Rosenberg has several years of competition and tactical training.  Competition experience includes IDPA, USPSA, IN Multi-gun, Allen County Defensive Pistol League, and NRA Highpower Rifle matches.  He has trained under the instruction of Tactical Defense Institute of Ohio primarily, but has taken courses with a variety of other instructors and professional competitors such as Tom Givens/Rangemaster, John Farnam, Manny Bragg, Massad Ayoob, Chris Cerino, Greg Ellifritz, William April, Craig Douglas, Northern Red, Guy A Relford, 360 Performance Shooting, Scott Jedlinski/Modern Samurai Project, Ed Monk, John Murphy, John Hearne, Gabe White, and Rob Pincus/ICE.  He has been an assistant instructor for Tom Givens courses such as Combative Pistol and Tom’s reknowned Instructor Development Course.  He has also been an assistant for Greg Ellifritz at Tac-Con21 and in his Teacher education program.   After teaching friends and family for a few years he decided to make courses available to more people and formed Condition Red Response LLC to do it.  Although CRR is a for-profit business, his goal is to minimize the cost to the student in an effort to help as many people become safe and proficient with their firearms as possible.  In Pistol, he holds Master firearm instructor credentials from Rangemaster as well as instructor credentials from the USCCA, and the NRA. In Rifle his instructor credentials come from John Farnam at Defense Training International. As a shotgun instructor his credentials come from Greg Ellifritz.

Susan Rosenberg has been training and competing for several years.  She is a Rangemaster certified Master level pistol instructor, USCCA instructor, and NRA certified Basic Pistol instructor.  In Rifle her instructor credentials come from John Farnam at Defense Training International. As a shotgun instructor her credentials come from Greg Ellifritz. She has taken courses including but not limited to classes with Tom Givens, John Farnam, TDI, Massad Ayoob, Chris Cerino, Greg Ellifritz, William April, Craig Douglas, 360 Performance Shooting, Northern Red, Guy A Relford, John Murphy, John Hearne, Tatiana Whitlock, and Manny Bragg.  She brings a woman’s viewpoint on firearm selection and concealed carry.  Her years of experience are a valuable asset to Condition Red Response as is her teaching background.  Her specialty is recognizing the individual learning styles of students and helping to shape the instruction to fit each student’s particular needs.  Like all CRR instructors, Susan has experience in other forms of martial arts and she uses knowledge of those arts to compliment her training methods in firearms.

Chris Cuney comes to us with a strong competition background in Bull’s Eye Pistol, IPSC, IN Multi-gun, and long range rifle matches.  Chris has been competing in Bull’s Eye Pistol Matches for the better part of 2 decades and with more than 50,ooo rounds downrange in Bull’s eye competition, he is an expert on all things accuracy.  Chris has also trained with hundreds of tactical instructors both locally and across the country. Some of these include Frank White, John Farnam, Tim Chandler, Ashton Ray and Greg Ellifritz.  He trains with ILEA and is currently training with local law enforcement departments monthly.  Chris has extensive martial arts experience in Shuri-Ryu and Judo which helps with understanding the place of firearms in a defensive situation.  Among his many certifications are instructor credentials from the NRA, USCCA, and Tactical Defense Institute. In Rifle he has additional instructor credentials from John Farnam at Defense Training International and he has shotgun instructor credentials from Greg Ellifritz.

James Bennett joined us in 2019 having completed the Rangemaster Instructor course with Tom Givens and has recently completed the Advanced and Master qualifications as well.  He has trained with Condition Red Response extensively before earning his Master instructor ranking with Rangemaster.  He is also a certified USCCA instructor.  Other instructors he has trained with include John Farnam, Chris Cerino, Greg Ellifritz, Guy A Relford, Ed Monk, and Rob Pincus. He has been an assistant instructor for Tom Givens courses such as Combative Pistol and Tom’s reknowned Instructor Development Course.  James has an significant martial arts background including Boxing, Jeet Kune Do, Wing Chun, Muay Thai, and Silat Kali.  Holding 2 silver medals from the Arnold Classic in stick-fighting, he brings a well rounded combative experience to CRR as well as a dedication to teaching students. In Rifle, his instructor credentials come from John Farnam at Defense Training International. As a shotgun instructor, his credentials come from Greg Ellifritz.

Nik Brost is an avid shooter with a strong background in competition (ACDPL) and tactical training.  He has trained with John Farnam, Greg Ellifritz, Gabe Saurez, Jeff Ott, Craig Douglas, Condition Red Response and others.  He has qualified in the Project Appleseed three times as a Rifleman.  Nik Holds NRA certificates in their RSO program as well as instructor credentials in Basic Pistol and Personal Protection in the Home.  He enjoys working with new shooters and does a great job helping us keep everything safe on the range. He holds Rifle instructor credentials from John Farnam.

Mike Palicte is a newcomer to shooting but has jumped into it with both feet.  He started his training with Condition Red Response and has been a top performer in those classes.  He recently began competing is USPSA and had the highest Alpha score for the entire match in his first attempt.  He has also competes in a Glock match and looks forward to more competition going forward.  He is certified as a Range Safety Officer through the USCCA. He recently completed the Urban Rifle instructor course with John Farnam and has also trained with Greg Ellifritz and Mason Lane.

Chad Mollema has been a long time Condition Red Response Student and joins us in 2021 as a Range Safety Officer having completed the USCCA certificate.  He has also trained with John Farnam (urban rifle instructor) and Greg Ellifritz.  Chad is an avid Duck Hunter and is a big fan of sporting shotgun.